The Blancks embody the Alsace family spirit: their destiny has been linked to the Kientzheim vineyards since the beginning of the 19th century

The Blancks are an Alsace family whose history dates back to the end of the 16th century; their connection with the Kientzheim vineyards started at the beginning of the 19th century. What began with farming a few parcels of family-owned vines developed into a fully-fledged wine estate that has remained true to its origins. Today, there are more than 35 hectares of vines in production, spanning five Grands Crus and four “lieux dits.” The family spirit is very much present here: two generations currently work in the business. Sons Frédéric and Philippe focus on perfecting the wines and developing the business, under the watchful eye of their fathers, Bernard and Marcel. Philippe's roots are deeply anchored in the terroir of Kientzheim; a generous-spirited man of integrity, he entertains visitors with stories of the ancient landscapes of the Kaysersberg Valley, formed over hundreds of millions of years, which have resulted in the terroirs shaped by winegrowers to produce the Grands Crus. Philippe Blanck has also been a Qi Gong adept for many years; discover the energy of the Grands Crus terroir in your glass and a whole new approach to wine tasting by taking part in an introductory lesson amongst the vines! Tasting possible in English. 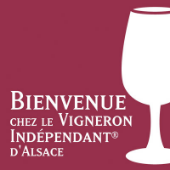